While shopping at Animart (our favorite exotic pet store) we were entertaining the usual energetic remarks of the South American owner, Diego. Upon catching a glimpse of Grae he exclaimed “So Baby (that is what he calls Ian) how old is that baby (Grae) of yours getting these days!! He is what like seven months or something like that, huh, Baby (Ian again)!?” You guessed it, “Baby” is his favorite word. I didn’t waste any time in telling him that Grae was in fact only seven weeks old. Diego and his wife looked at each other, laughed, then asked if I have been feeding Grae MiracleGro!  Similar conversations take place almost every time we go out in public. We’ve gotten an assortment of other comments like:  “Well, he sure is healthy, isn’t he?”  and  “He’s gonna be a linebacker.” I have even taken to calling him Pork Chop from time to time 🙂 (Ian says he’s going to get a complex.)

He’s a big boy! And what can I say, is there anything cuter than baby rolls?! 😉

Yesterday, his pacifier fell out of his mouth, so he PICKED IT UP AND PUT IT BACK IN HIS MOUTH! Really!  Ask Ian if you don’t believe me! 🙂 🙂

He can almost SIT UP all by himself (only for a few seconds, but still- most 7 week olds are still learning to pick their own heads up)

When he’s laying on your chest, he pushes off of your lap, making him stand up, supporting his own weight! I often find myself hoping he doesn’t decide to take off walking lol!

I keep telling him to stop growing up so fast, but he isn’t listening.

Another thing we always get told by strangers- He’s PRETTY! lol- we have been getting told he is such a “PRETTY BOY” since the day he was BORN… what exactly does that mean? Why do people choose the word PRETTY, not HANDSOME?! hahaha 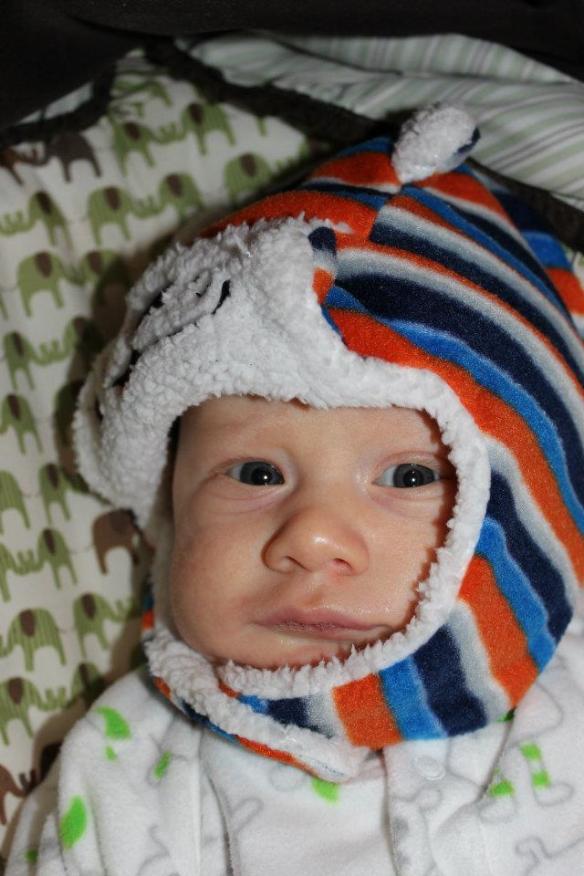 Anyway…We used his last “Size One” diaper yesterday- from now on he’s wearing Size 2!  He fits perfectly into his 6 month sized clothes now… which means I had to sadly pack up all those adorable itty-bitty newborn clothes and even most of the 0-3 month sized clothes… How depressing.

We are very thankful that he still hasn’t become a crier.  He communicates with us through a series of grunts… and if we can get him fed fast enough, no tears are shed. 🙂 Thank goodness he isn’t colicky.

He stays awake almost ALL day long now- a few days ago he was up for 12 hours STRAIGHT- I guess he takes after his Momma in that respect.  I HATE to sleep…

This week has also been the week of smiles and laughs!  Its almost GUARANTEED that he’ll give you a big, gummy grin if you tell him he is “SOOOOO CUTE!”  🙂 I don’t know what it is about those words, but he LOVES it.

It would be ever so kind of you and it’ll just take one second of your time to click the link below- your click will count as a vote to get us into the Top 10 🙂 Thanks!